We were interested to learn what we can tell from the "time of arrival" of high frequency radio signals (HFTOA). The project was initially motivated as a way to get geographical coordinates of unknown transmitters by measuring differential delays to multiple receiving stations using a common timebase provided by GPS satellite receivers. This continues to be our major application. Another thread has been to see what an individual receiving station can learn about HF propagation by listening to self-tagged radio transmissions - e.g., standard time and frequency stations such as WWV.

Our group has been at work developing software, hardware, and coordination methods to apply to HFTOA measurements.

This project was a collaboration of a small team of radio amateurs with the ARRL Laboratory in Newington CT.

To do "HFTOA", you only need some basic equipment: an HF communications receiver (say 500 kHz - 30 MHz), a computer with sound card, and a time-tagging source. For time tagging, we currently use the 1 pulse per second output available from many GPS (Global Positioning Satellite) receivers. At AA6E, I use a relatively inexpensive Garmin 18-X unit that provides a 100 msec 1 pps pulse. The pulse needs to be narrowed down to the low microsecond range for best use in this work. I use a type 74LS123 one-shot IC. The pulse output is simply added to the receiver's antenna input. (It is necessary to "tag" the input RF to avoid problems arising from the delay time of the receiver.)

To record the data, we began with ordinary audio packages such as Audacity that let you select sampling parameters and output formats. We are now working with 12,000 bps 16-bit sampled WAV files, produced by Joe Taylor's "hftoa" program available at http://www.physics.princeton.edu/pulsar/K1JT/hftoa.exe . Usage instructions are available in K1JT Email 3/2011.

The analysis of single- or multi-station HFTOA data is conceptually straightforward but it takes considerable signal-processing and programming skills to write. Our group is actively working on this problem. For now, unless you roll your own, you need to submit your data to one of the team members who will incorporate it into our analysis process.

The simplest project for "Time of Arrival" experiments requires only a single receiving station. As such, it is easy for you to work at your own rate, without a lot of coordination with other folks.

Our team is interested in using HFTOA techniques to locate unknown HF transmitters. This requires comparing (cross-correlating) the outputs of multiple receiving sites, where each receiver's signal is time-tagged with a GPS-derived 1 pps pulse. [Any precise and accurate source of 1 pps pulses can be used, but GPS receivers are the easiest and cheapest source for radio amateurs.]

The HFTOA project has been making rapid progress. We have had a number of experimental runs to try out new capabilities:

March 11, 2011. Voice of Russia and W1AW. We had earlier tried to copy W1AW on 40M on 7290 kHz. but found that it was overwhelmed by a very strong signal from Voice of Russia on the same frequency. Making a virtue of necessity, we added it to this night's receiving schedule. We also scheduled the W1AW SSB bulletin on 160M: 1855 kHz, received in AM mode. (Using AM relieves us of the need for precise tuning and also avoids problems with propagation phase.) Participating were AA6E, G4ZFQ, K1JT, K9AN (two receivers), W2KKJ, and W3PM. W2NRL was set to receive, but had a local power outage.

Preliminary analysis summaries have been produced by K1JT for each receiver pair on each of two signals (VoR 0230Z and W1AW 0245Z) are available in image form. See HFTOA Plot Explanation for information about how to read these plots.

March 2, 2011. Four receivers, WCKY, Cincinnati. In a nutshell, four receivers (K9AN, W3PM, K1JT, and AA6E) listened to the AM transmissions of WCKY. Repeatability in differential delay over an hour or two was excellent, apparently .01 msec or better. A best-fit solution for the location of the WCKY transmitter was within about 12 km (7 miles) of the position given in the FCC database - amazing accuracy.

February, 2011. Individual WWV runs. These are continuing with as many participants as possible. The WWV reception allows you to test the GPS time tagging and provides an interesting view of propagation on WWV frequencies between Colorado and your QTH. Also, possibly from Hawaii WWVH.

January 31, 2011. AM Broadcast stations. K1JT and AA6E recorded AM broadcasts from WFAN (NY), WBZ (Boston), and WCKY (Cincinnati). WFAN is too close to both of us and about equi-spaced. WBZ was recorded but did not produce sensible delay results. WCKY seemed to do well. We were using 11,025 kHz 16-bit sampling. AA6E used Audacity recording software, while K1JT used custom software. We also tried recording the W1AW SSB bulletin (using both SSB and AM detection). The WFAN result was particularly nice. See k1jt_hftoa_plot.pdf.

January 24, 2011. Observations of WWV and CHU. We are talking about radiolocation by means of Time of Arrival (TOA). We are thinking about finding uncooperative, random HF transmissions, but how well can we really do if we solve some of the data collection and transmission problems? How about using the very cooperative and very well known transmissions from WWV and CHU? They broadcast very accurate 1 pps ticks that we can receive and reference to a GPS-derived time base. If we can't "find" these stations, we might as well wrap it up now!

We have been recording audio signals using two-channel sound cards running at 48,000 samples/second, 16 bit, writing uncompressed WAV files. One version of analysis software operates like a software oscilloscope that triggers on the GPS 1pps pulse and watches an RF channel, say WWV 10 MHz. We mix a narrow version of the GPS pulse with the HF coming from the antenna to provide a time calibrator that is independent of receiver delay. (Delay in a DSP receiver can be very significant.) Here is an analysis of a recording at AA6E. 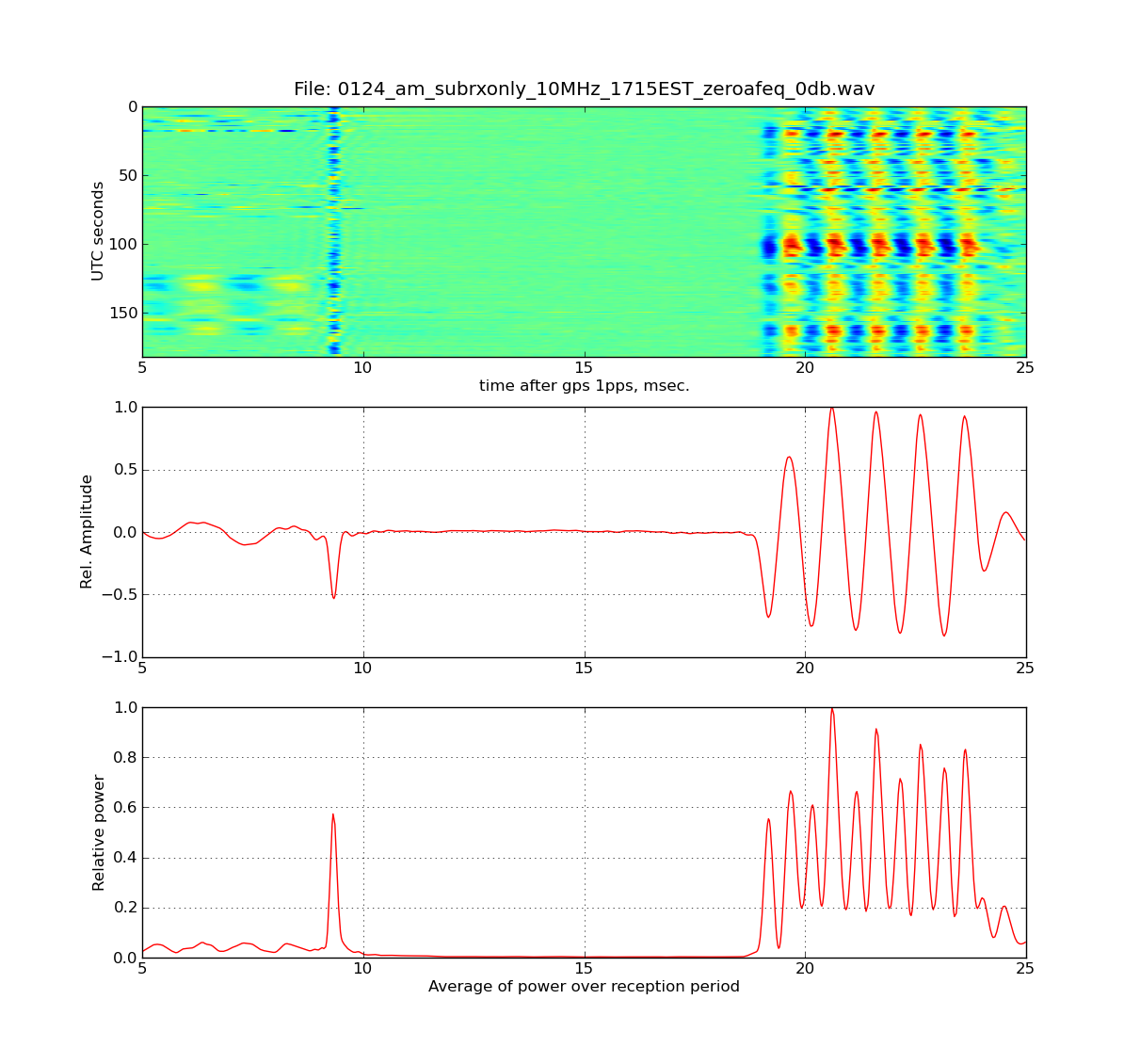 January, 2011. Recordings of W1AW and WFAN. W1AW's evening voice bulletin was recorded at K1JT and AA6E, but propagation has been a problem from CT to NJ at 9:45 pm local time. The AM broadcast station WFAN is strong at both stations, however, and we can use it for some checks. In particular, we find that SSB reception (as we would typically use for amateur transmissions) suffers from the rapidly changing RF phase. Phase coherence may not last for more than a few seconds. Using AM demodulation may be a way of scrubbing the data of irrelevant phase information. AM correlations of WFAN were very good. Receiving SSB signals with an AM detector may be a useful technique.