What is Amateur Radio?

This article is for readers who are new to the idea of Amateur Radio, but who have heard that there might just be something interesting to learn.

Amateur radio (or "ham" radio) is a non-commercial hobby that encourages radio communications and experimentation. Ham operators are licensed by the U.S. Federal Communications Commission (FCC Amateur Radio Service) or the equivalent authorities in other countries. Historically, amateur radio has attracted technically-inclined people who are interested in building and operating radio receivers, transmitters, and antennas. Today, excellent commercial equipment is available at attractive prices, so hams less often build their own basic receivers and transmitters. Many interesting technical frontiers remain to be explored, including for example, computer-based radio signaling methods, satellite communications, and new antenna designs.

Ham radio operations is the most interesting aspect for many. You can compete to work the most geographical areas ("DX" - long distance), you can help out in emergency and public-service communications, you can operate "mobile" from your car, boat, or airplane. There are many other special operating niches.

Amateur radio has a grand tradition from the 1910's onward, but the proliferation of computers, internet technology, cheap long-distance, and the cell phone have fundamentally changed the environment for the hobby. Still, there are over 600,000 licensed ham radio operators in the U.S., and active organizations like the American Radio Relay League (ARRL), supporting everything from old-fashioned "rag-chewing", to data transmission, to moon-bounce and satellite based communication, and beyond.

You can find a lot of details at the Wikipedia: Amateur Radio. The ARRL's Handbook (2019 ed.) is a definitive reference book for modern radio and electronics.

Amateur Radio began in the early 1900's using the technology of the day:  Morse Code and "spark" radio transmitters.  Operators would exchange non-commercial radio messages very similar to the wire-line telegrams of the day, which were sent across the continent by Morse.

The ARRL (aka "The National Association for Amateur Radio") is the major US organization supporting Amateur Radio.  It was formed in 1914 specifically to support the passing of messages.  Over time, radio connections supported more and more unstructured conversations between operators.  While general conversations ("ragchews") are common today, there is still a hardy subset of ham operators who pass non-commercial messages.

As technology developed in the 1920's, hams added voice communications to their repertoire.  In the 1940's the new radioteletype mode became possible.  At first, this required large and troublesome electromechanical typewriters, but as personal computing technology came in in the 1970s, the big machines went away in favor of computer keyboards and displays.

Many other new communications methods become available.  You can communicate through special amateur earth satellites and even bounce your signal off the Moon.  You can operate from your car or boat.  You can use FM voice modes mostly in the VHF and UHF bands using handheld ("walkie talkie") radios.   You can send computer-to-computer messages using advanced processing methods.  There are video (image) transmissions, too.

ARRL is still very active today as an advocate for and a service to Amateur Radio.  It publishes the monthly QST magazine along with many book titles.

How we communicate today 

Ham communications cover a wide range of operating styles.  Here are a few of the more common ones: 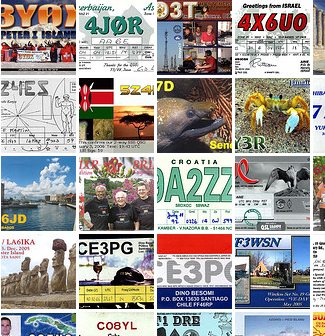 A delightful tradition is the exchange of "QSL cards" confirming an on-air contact.  Originally QSLs were The FCC license supports innovations in radio   printed cards that were sent by post, or through special QSL bureaus.  In recent years, several on-line QSL equivalents have developed, such as ARRL's Logbook of the World and e-QSL.  QSL confirmations are important when hams are seeking awards such as DXCC (for working 100 countries or more).

How we communicate today: technology

There are so many technical options available today, it's hard to make a good list of all the ways you can communicate.  Here is a list of some of the more popular activities: 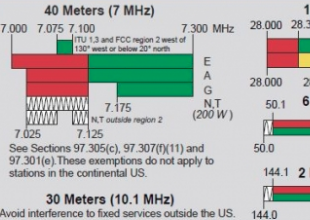 The FCC and other world regulatory bodies have allocated many radio bands for exclusive (or shared) use for Amateur Radio.

This chart (pdf) shows the most commonly used bands in the U.S.